Manchester United travel to Goodison Park to face Everton on Sunday in what is going to be a crucial game in the race for Champions League qualification for the Reds.

Ole Gunnar Solskjaer’s men have lost five of their last seven games across all competitions and face an Everton side that has taken points off Liverpool, Chelsea and Arsenal this season.

We find ourselves playing catch-up in the top four race and any more slip-ups at this stage of the campaign could prove fatal to our hopes of playing Champions League football next term.

Luke Shaw will serve the second of a two-match ban for picking up 10 bookings during this campaign, but Ashley Young will be available following his one-match ban against West Ham last Saturday.

Antonio Valencia, Eric Bailly and Ander Herrera remain out injured at the moment.

De Gea will be aiming to redeem himself after his howler in our 3-0 defeat at Barcelona in the Champions League.

Dalot came as a substitute against Barcelona on Tuesday but could be handed a start at the weekend. Despite his struggles against Barcelona in the mid-week fixture, Smalling has done well at the back.

Undoubtedly Manchester United’s best centre-back this season, Lindelof is expected to partner Smalling at the heart of our team’s defence.

With Shaw suspended, Young will deputise for him at left-back. The 33-year-old will need to put in a skipper’s display at Everton after coming under intense criticism in recent weeks. The Brazilian has shown flashes of his quality off late while operating as a deep-lying playmaker. He is certain to start for us on Sunday.

Pogba needs to start influencing games more if United are to achieve a place in the top-four.

McTominay has been excellent in the recent few weeks, showing he has the quality to succeed at Old Trafford. He’s improving week in and week out and deserves to keep his place in the team.

Showed some fight after coming on as a substitute at Camp Nou on Tuesday. Now injury free, it’s time for Sanchez to step up and show his true class against the Toffees.

Martial needs to get back his mojo and deliver a strong performance at Goodison Park on Sunday.

Lukaku came on a substitute against Barcelona on Tuesday but he could be handed a start at his previous stomping ground at the weekend. 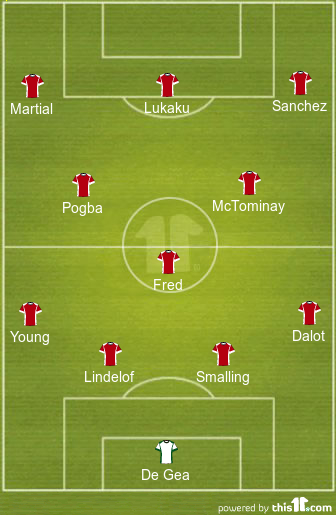