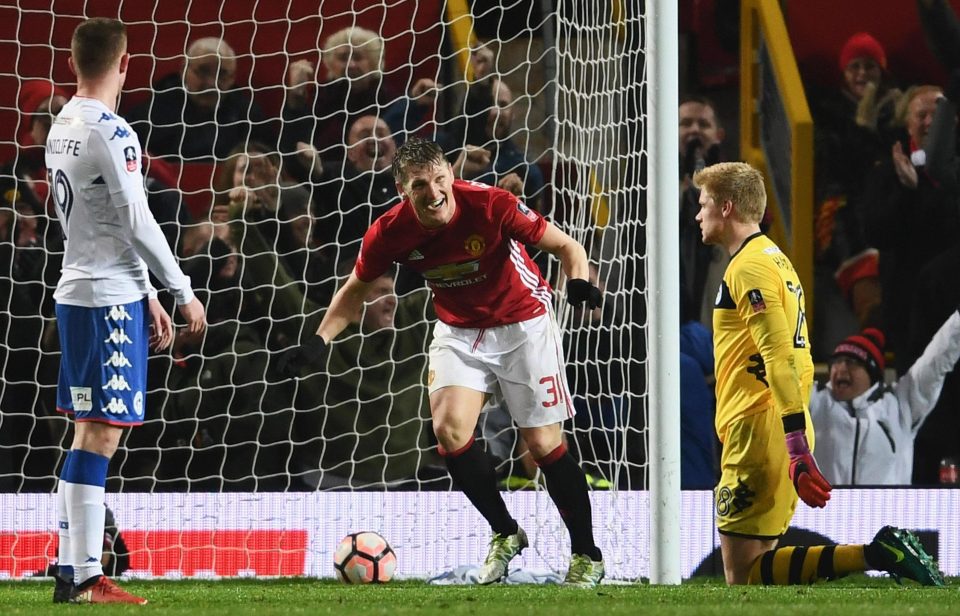 José Mourinho has made a stunning U-turn by confirming that midfielder Bastian Schweinsteiger will be part of the club’s second half of the campaign. The German was forced out of the first team immediately upon arrival of the Portuguese manager, despite being one of the most successful at his position. The World Cup winning midfielder spent much of the first half of the campaign training with the reserves. Yet, his incredible professional attitude seems to have helped him make a way back into the first-team. Schweinsteiger has started featuring for the first team in a couple of matches of late.

He has made his biggest impression to date in the 4-0 win over Wigan Athletic during the weekend. The victory helped United progress into the fifth round of the FA Cup. In doing so, it also presents a huge problem for manager Mourinho. The Manchester United manager already has a hectic schedule lined up due to the club’s involvement in the EFL Cup final. With the Europa League action set to resume, United will also have to concentrate on the Premier league but from these three cup competitions.

“Yeah, he is staying. He is going on the Europa League list because we open spaces with Depay and Schneiderlin having gone and we don’t have many options in midfield. Mourinho was quoted by The Sun.

“Ninety minutes today was probably too hard for him, from minute 65 it was hard for him but now I think he is happy.”

“He was a good professional when he was not playing, having some minutes he will be the same. With so many competitions and games, he will be an option.”

The fixture condition only makes squad rotation extremely important, but the transfer window has given a few headaches to Mourinho. Only a few weeks ago, the squad seemed surplus with talent and this allowed the manager to part company with the likes of Morgan Schneiderlin to Everton and Memphis Depay to Lyon. Now, however, the squad looks thin and Schweinsteiger has been included in the Europa league squad in order to help the manager make some changes every now and then.

Apart from the confirmation of Schweinsteiger’s new status, the manager also claimed that Ashley Young is on the verge of moving away from the club even though he does not want to sell the midfielder (The Sun). He has been increasingly marginalised over the last few months. Just one appearance since December 10th was not enough to convince Young that he remained in the plans of Jose Mourinho. Now, however, Mourinho would rather keep the former England winger since he would not only give flexibility in the midfield but also could play as the left wingback. Mourinho continued:

“The only player that I am aware of possibly leaving is Ashley Young, a player I would love to keep.”

“I am not happy if he leaves, that is why he didn’t play today because I don’t know if he is going to stay.”

Even though Schweinsteiger may remain at the club until the summer, it looks a certainty that he would leave the club for the MLS. The German has been receiving a lot of offers from North American football, and strangely not Chinese clubs. Against Wigan, Schweinsteiger had a big impact by scoring one goal and providing an assist for his teammates.