A new era starts for Manchester United after the departure of Jose Mourinho. The club legend Ole Gunnar Solskjaer has been handed the responsibility take charge of the team for the remainder of this season.

The former United striker has managed in the Premier League before, plying his trade at Cardiff City, but that did not work out too well.

Solskjaer is remembered for his heroics in our 1999 Champions League win. However, he has very less time to turn things around this season.

The Red Devils lost to Liverpool in the previous game. Our next game is against the new manager’s former club Cardiff City.

The gaffer has to make some tough decisions ahead of the fixture. Here is my predicted line-up for the clash at the weekend.

De Gea was a little unlucky with the two second-half goals he conceded against Liverpool and needs to be at his best if we are to keep a clean sheet against the Bluebirds.

It was a surprise that Valencia didn’t start against Liverpool but he should be back in the United team against Cardiff.

Chris Smalling’s injury could open the door for Bailly to impress. The Ivorian was great against the Reds and he needs to be consistent.

The Swede returning to fitness is great news for us, and in Smalling’s absence, he has to step up.

The Englishman should remain as our left-back with Luke Shaw yet not risked to start.

Fellaini should start for us on Saturday after coming on as a sub in the 3-1 loss to Liverpool.

The French midfielder hasn’t played in recent weeks but we should see him back in the starting XI at the weekend.

The Serbian didn’t have a great outing at Anfield, and hopefully, performs much better at Cardiff on Saturday.

Lingard was in the right place at the right time to score in our previous game and should keep his place in the starting XI.

The Belgian has looked off the boil in recent weeks, and hopefully, under a new manager, he finds his shooting boots.

Martial came off the bench in the loss against the Reds but should return to the starting XI under our former striker. 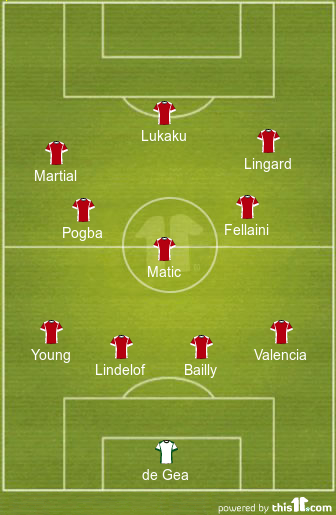