Manchester United won’t have it easy once they return to action this weekend. The Red Devils face a Chelsea side who are yet to taste defeat this season.

United have had their struggles since the start of the campaign. However, they managed to produce a stirring comeback to beat Newcastle in their previous game.

The Red Devils will need to play in a similar manner to beat the Blues and Jose Mourinho must prove his critics wrong at his old stomping ground.

United do not have many injury concerns to deal with, however, the form of players aren’t great.  Here is our predicted line-up for Saturday’s clash.

The Spaniard might struggle to keep clean sheets with the national team but is on a different level when playing for us. De Gea will start unless something unforeseen happens. The right-back should return to the team and hopefully produce a quality performance.

Smalling has been one of our consistent players and should be at his best when we face Eden Hazard and co.

The Swede might not be as experienced as Phil Jones or Eric Bailly but Mourinho seems to prefer him in the defence.

The English left-back was withdrawn from the international break but could return to face the Blues. The midfielder was involved with the national team during the recent break but must play at his best at Stamford Bridge.

The Belgian did not play the last match for the national side due to injury. However, he is fit for Saturday.

The Spaniard started our comeback against Newcastle and should get a chance against his former club.

Sanchez got the winner for us in the last game and should start in this colossal clash this weekend.

The Belgian scored a brace for the national side during the break. But his form needs to improve for us as well.

Read more: “He’s a different player in an England shirt” – Some Man United fans criticise club for not getting the best out of star youngster

The Englishman was excellent in the win over Spain and should start ahead of Anthony Martial. 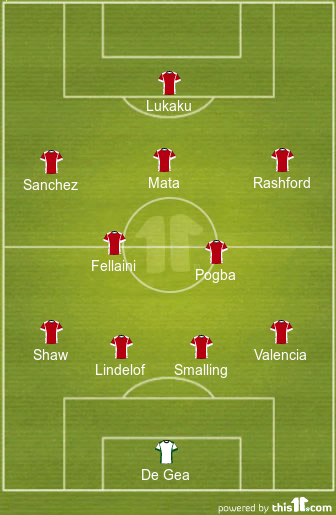